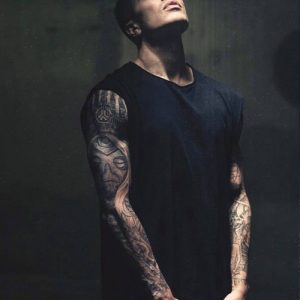 Just four years after his official debut Headhunterz has claimed a top position in the world of dance music. Rising from the rapidly expanding hard dance scene he has entered the DJ MAG top 100 at an amazing 17th place. This remarkable feat comes after a series of acclaimed mainstage performances, two albums, numerous releases and several chart topping anthems. On top of his musical career comes a strong character which echoes through in a massive following on the web and making him a most wanted subject for autographs and fan messages.

And it did not take a lot of effort to change into the artist he currently is. Making career as a voice actor, songwriter and following the Rock Academy he presented a big challenge for other artists to follow. Right from the start he revolutionized the way of performing on stage and introduced his signature headphone position. It will not be far from the truth to actually claim he was born for this line of work.

As the first of a new batch of hard dance artists he premiered with his own sublabel at the world renowned Scantraxx Recordz named ‘Scantraxx Reloaded’ where he immediately released a series of hit records. Among his greatest pieces of work are ‘Rock Civilization’, ‘Power Of The Mind (Qlimax 2007 anthem)’, ‘The Sacrifice’, ‘Scrap Attack (Defqon.1 Festival 2009 anthem)’, ‘From Within’ and ‘Save Your Scrap for Victory (Defqon.1 Festival Australia 2010 anthem)’.

Together with fellow producer Wildstylez he created quite a stir in the international dance community with the 2008 ‘Project One’ campaign. By producing a highly successful studio album in under three months they set new standards and confirmed their abilities as musicians. The tour following the release was much asked for internationally and by setting the limit to just five performances it drove the demand to new heights. In 2010 the second album ‘Studio Sessions’ created an equally big impact and was followed by a new international tour which included the US, Australia, Russia, Canada and several big editions in Holland.

Amongst his greatest appearances are performances at various editions of Qlimax, Defqon.1 Festival (closing the mainstage in 2009) and Decibel Outdoor Festival. Having the honor of performing solo at the Headhunterz branded X-Qlusive event in 2010 can be considered the highlight of his career. For 2011 a new series of mainstage performances await and every spare moment is used to complete his new studio album with co-productions by the Noisecontrollers, Psyko Punkz and Zatox. With the ever growing hard dance scene expanding all over the world Headhunterz is destined to be on the forefront.