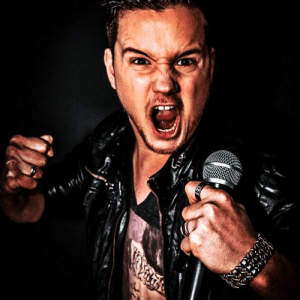 As a 12 year old boy Pieter van de Veewey also known as MC Axys dreamed about a career as a superstar DJ. After a few years of practicing with his own drive-in show he decided to buy some real turntables and a mixer. In May 2008 Axys got the opportunity to play at Thunderdome radio with the wish to breakthrough. That night he failed as a DJ and got discovered as a MC by the hosts of TD radio: MC Justice and MC Da Mouth of Madness.

Convinced by his hosting talent, they advised him to become a MC instead of a DJ, so did he. In less than a year he was privileged to perform at the biggest festivals and indoor parties like Q-base, Defqon1, Masters of Hardcore, Qore 3.0, Nature One, Ground Zero etc.

In 2010 Axys went into the studio with Chrono & The Demon Dwarf to make a hardcore track, which resulted in the release of “Pay For Mercy”. It was a big step for Axys, because afterwards he came in contact with other international producers. A big highlight is the release of “Destroy D Elements” (with Amnesys) which already hit the first spot in the Hardtunes top 10 on the first day and stayed there for more than two weeks.

Nowadays Axys is busy working on a few projects with different producers and he is trying to perform as much as possible!