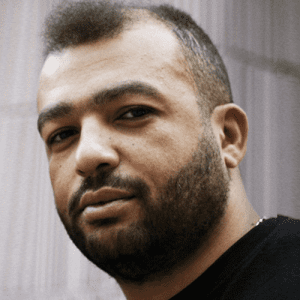 In 1994, Daniel decides to pass behind the turntables with the pseudonym of RADIUM. He becomes popular quickly because of his technic and because of his very fine selection. Parrallely with his collaboration with Micropoint, he develops his production alone and a lot of vynils released under this name born (More than 50 today on labels like Psychik Genocide, Neurotoxic, Dead End …)

In 1996, Daniel collaborates to the creation of the labels Dead End and Psychik Genocide; for promoting and producing his favourite music: the Hardcore. After him, this is the musical style who gives him the most possibilities to make musical experimentations.

In 2000, he becomes co-manager of AUDIOGENIC, the structure which feders different labels Psychik Genocide, Neurotoxic, Arena, Subconnexion, and also the licensed labels: Striking Wave, Dark temple or Alternhate. These labels gets quickly a notoriety on national and international scenes by the quality of their production. After de dissolution of Micropoint in 2002, Daniel continues his carreer alone with a first album “Paranoia Parformance”, who is welcomed as a success by the quality of the production and by the originality of his composition. A lot of tracks of this album have been remixed by artists like Tieum, the Speed Freaks, Marc Arcardipane, Hellfish or others….

In 2003, he comes back with a second album “In Extremist” to bring us into the extrem side of hardcore. He begins his live performance alone, for the pleasure of all the nostalgic of Micropoint.

In 2006, Daniel signs his third album “Terminal Trauma”, on this one he slows a little bit the rythm of the tempo with mid tempo tracks. Radium welcomes 2 dj’s for the vocals : Lenny Dee, a myth of the electronic international scene on the track “Free Party Animal” and the young and talented Daisy for “trust or Die” The success of his discography leads Daniel to make performances in live with the pseudonym of Micropoint or Radium, as well as in dj with the pseudonym of Radium. He has played in all the french locations, sometimes with a show illustrated with a drummer and a Mc. He has played in the biggest events and festivals in France, or abroad : England, Scotland, Switzerland, Italia, Spain, Germany, Tchecoslovaquia, Belgium, Holland, Russia, Canada, USA… In fact, Radium is the symbolic figure of techno hardcore international scene, very talented to compose tracks excessively dancefloor with noisy and industrial sounds…