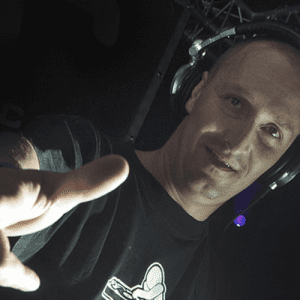 Dj Dione started his musical carreer at the end of the 1980’s as a dj at a local youth-centre, followed soon by dj-gigs at local parties. His first big event was the very first Mysteryland and soon after that he appeared at more ID&T parties like Thunderdome,Speedrazor and Earthquake.

He also began with radiowork at a local radioshow,which eventually lead to presenting Holland’s most popular (and award-winning) hardcore radioshow,’Hakkeuh’ on New Dance radio.This show is still regarded as being legendary,and the music played there has been a standard for the old generation as well as a big inspiration for lots of producers of todays generation.

In the meanwhile he started producing his own tracks,which lead to his tracks being released on over 50 compilations and 2 album cd’s at several Ramshorn labels,under several aliasses. Soon after that he was contracted by ID&T,where he released his first 12″ vinyls on labels as Deathfly and Thunderdome records. Plus a lot of his tracks appeared on the best-selling Thunderdome cd’s from those days.

At the end of the 1990’s he went to produce for Megarave records. Here he released many of his music on loads of vinyls and cd’s and he also teamed up with several other hardcore icons to create lots of classic tunes. His releases could soon be found in every dj’s record-bag and some of his tracks are still regarded as classics by many. Even his older tracks are still being played by many dj’s today,while his newer releases are always amongst the best-sellers in the industry.

In the meanwhile he has played,and still is playing,all over the world. From LA to Sydney. From massive events in Switzerland to legendary events in Holland. From famous clubs in Germany to mega-clubs in Spain. Everywhere he gets great response from the crowds and he still is considered to be one of the leading hardcore producers and dj’s.

It’s not crazy to say that he is one of the most productive hardcore producers ever and that his tracks still are a big inspiration to many music lovers all over the world.