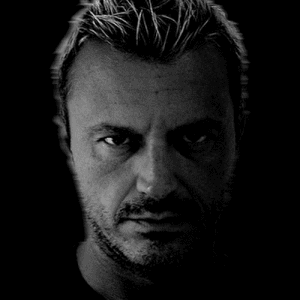 Everything started on 1988 ’cause a school friend that was Djing at home: spending time with him and with his turntables took me into the mixing. I remember that my first turntables where without pitch control… my fingers where the pitch control! My first gigs where at private parties and with the money I gained I finally bought the mythical Technics turntables. After my studies I’ve been working at touristic villages and, on that period, I partecipated to a DJ competition in a club located nearby the place I was working, and I won. The resident DJ of that club, Tony De Franchi (from Milan, too), became a good friend of mine and, during the following months, he introduced me into the Milan club scene.

On 1993 I also worked as DJ/speaker in a local radio station, Radio Power Station.

On 1995 I discovered the rave scene in Zurich, at Energy, and RND Promotion was born: I started a collaboration with Arnold Mayer (Energy boss) to promote his raves in Italy, and, from that moment on, RND became the italian connection with foreign rave parties. With RND I had the opportunity to work at Radio Italia Network together with Christian Hornbostel, presenting “Rave on line”. After that, together with Digital Boy, we presented “Extreme”, a hardcore/industrial radio show, again on Radio Italia Network.

My first steps in music businnes started on 1995/1996, when I was working at ACV as office manager and distribution account. On ACV I remixed Robert Armani’s “Fantastic Voyage” (on the same ep there was a Sven Vath remix). After that, some releases on Hot Tracks and Acid Tribe. I’ve also been always busy with techno productions under the pseudonyms Steve Land and Dex, releasing my music on Planet Rhythm UK, Audio, Molecular, Eukatek: I’ve just started Random Electronic , my Paris-based techno label.

Concerning the hardcore scene, I’ve been label manager of Head Fuck Records for two years and, after that, I started my own R-909% Records, (nowadays member label of Audiogenic) producing great frenchore/hardtek tracks; I’ve also released many tracks on labels as IST, Epiteth, Traxtorm.