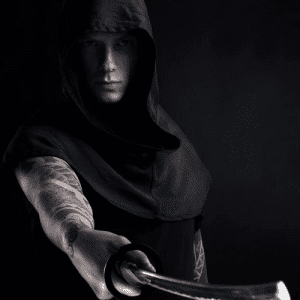 Tripped is Francis Jaques. A Belgium-based DJ, live act and producer who has been bringing hardcore in all its styles and forms. With his first release dated 2007, Tripped has become increasingly effective at producing industrial hardcore with a tekno twist. Shattering kick-drums and never-ending loops, the music Tripped creates is downright dirty. Filthy and unpolished, the effect is clear: dance-floor disaster.
As manager of Badback Records, Tripped gave himself and others an hardcore outlet. A stage to redefine hardcore, the Badback way. Combined with releases on respected labels such as Strike records, Rebelscum, Hong Kong violence, Motormouth Records and The Third Movement (‘They got steel’, together with Matt Green), his music has definitely put Tripped on the hardcore map.
A hardcore map that’s been growing in size. With his act gathering momentum, Tripped is becoming a familiar face on darker hardcore line-ups. Performing his powerful live-set all over Europe, global chaos is in reach with Tripped getting bookings in distant places such as Tokyo, Japan. Either small and intense or big in impact, Tripped can handle any size sound-system. He has played at big events such as Dominator, Masters Of Hardcore, Q-Base, Decibel, Montagood, United Hardcore Forces and others. Solo as Tripped or under the Industrial Terrorists moniker (with Subversa), this guy will grab the opportunity to thoroughly damage sound-systems. Increasing distortion and BPM’s, nothing is safe on his path of destruction.

Not shy of the Gabber mantra, Tripped drops kicks like a madman. Bringing terror and annihilating industrial, this guy is a defining factor in the always-evolving Belgium hardcore scene. Mayhem in audio form, in both style and tempo. Tripped is without a doubt one of Belgians hardest acts. A true kick-drum manipulator.