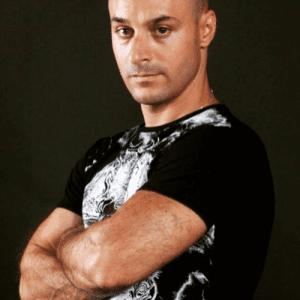 Since 1993, Vincent; also known as “The Unfamous” had been listening to Hardcore, in 1995 he decided to create his own hardcore tracks! Using sounds and samples extracted from the famous Thunderdome compilations, ‘Earthquake” or ‘Mokum”. He began to learn production on Fastracker II software, and was strongly inspired by Dutch compilations as well as some French ones. Hardcore Fever 1 & 2 and Hardcore III by Laurent HO were some of his greatest influences.
In 2001 he began mixing on turntables to become a DJ/Producer. Most notably he enjoyed mixing with labels such as; Shockwave Records, Baby Boom and Ruffbeat. He then joined a group in northern France called DGX for 2 years under the name “Dj Executor”. He also wrote several unreleased Terror tracks, at this time under the name “Explicit French Terror”.

2003: he left DGX and decided to devote himself to an old project that was established in 1999 with a friend called the “Imperium Bass” project through which he completely changed his musical production system towards using Ableton Live.

2010: he and some friends created the label “Paris Hardcore Mafia” and made several hits with “Imperium Bass”. He released an “Explicit French Terror E.P”, “Breathing Hell E.P” and tracks on a “various artists EP”. Also an exclusive output Hardkryptic record, under the name “PHM” for a remix of “Imperia – “Rock da mic”.

2012: he had a hit with his production of the “Life is a bitch EP” (Featuring DJ Chrono), on the famous Label; Megarave Records. He also made a remix of “Horror” (original by Rotterdam Terror Corps) and some mashup/bootlegs which were a hit on the dance floor, an appearance on the Exode Records with 2 titles featuring “D- Ohmicyd” and “DJ s’Aphira”, and one featuring “DJ TSX” out on Partyraiser records.

2013: he ceased all music projects and decided to create his solo project named “The Unfamous ” with a style focused on the original Dutch Gabber sound, with influences from labels like Offensive Records, Neophyte Records, Megarave Records, mainstream and true hardcore.

In December of that year his productions were again featured on Megarave with the “Fuck Your Life EP”, with 4 tracks reaching the Hardtunes top 10. He also made an appearance on DNA057 with a remix of “Twisted Fuck” with DJ Darkcontroller, which also climbed into the Hardtunes top 10.

2014: he made a track called “Rock n Core” released on a Partyraiser Records 005, which was a big success and hit number 1 in the Hardtunes charts for 2 weeks. His second solo EP on Megarave Records called ‘Blow Your Brains”, also hit the number 1 at the same time. This meant his tracks were positioned 1st, 2nd, 3rd, and 4th with 2 different labels. During the years, his achievements have earned him several notable booking, as has 2014 Pokkeherrie (German edtition) he even realize a special remix of the famous track “Pokkeherrie” by Evil Activities, he also participated at Project Harcore 2014 (Netherland) and played in Switzerland Sonic 23 (christmas edition).he finished the year with a last track released on Partyraiser Records009 “Kaboomized bitch” combining 2 of his old tracks in one.

2015: Vincent was contacted by Paul Elstak to join the legendary Dutch label “Offensive Records”. in March he produced “Baddest Motherfucker EP” a EP with two solo tracks “Slut Machine” and “Doppelganger”, but also 2 huge collaborations “Baddest Motherfucker” featuring Paul Elstak and the remix of “Rage” featuring Dj Radiate. This EP was a total success, reaching the top # 1 in sales for 2 weeks. Shortly after a remix project of 4 tracks was released on Megarave records, remixed by Darkcontroller, Exotane, Tharoza and Hakken Batallion. He made appearance on OFF054 with “Show me what you got” Featuring Paul Elstak and a remix of “Back from the dead” original by Paul Elstak & Partyraiser, and on OFF055 featuring Dj Radiate on the remix of “i had to kill a lot of people”. during this year he has the opportunity to play at Falcon 1st Edition

, Pont Aeri 23years (Spain), RAVE 2 (France) and Nightmare 2016 the dark shadows,he was responsible of the Official Anthem with the Offensive Records Crew. The Unfamous! Hardcore gabber Music only with powerful melodies, some serious aggressive scream sounds and massive kicks to Boost the dancefloor

2016: he released severals collabs and solo tracks on Offensive Records and played few parties during the year,and started to work on his first album for his label.