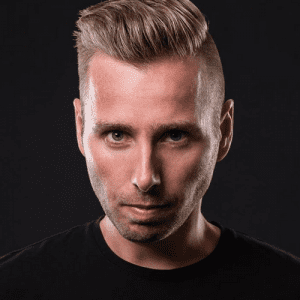 Tha Playah is a remarkable artist in many ways. He has had his own style in hardcore from his first release on, which he managed to develop by every release. After the “Hit ‘Em” EP had a huge impact for a debut release, he lived up to the expectations with significant tracks such as “Mastah of Shock”, “Fuck Tha Fame” and “Weird Shit”. In 2006, Tha Playah showcased his unique talent with his debut album: “The Greatest Clits” was filled with older tracks, but also featured a huge amount of brand new material which became huge bombs on the dance floors. Some of the groundbreaking tracks were “I Call The Shots”, which marked the beginning of a new kickdrum era in Jim’s music and the legendary “Fuck The Titties” remix by Tommyknocker and The Viper. Tha Playah also created the Nightmare anthem “Enter The Timemachine” with Mad Dog and also his “The Prophecy Unfolds” remix became a huge favorite of the audience.

Tha Playah’s big break to the top of the Olympus came in 2008 and 2009, when he gave a preview of his forthcoming second album with the “Still Nr. 1” EP. Tha Playah developed himself into a true productional ace and left everybody in a daze with the successor of “The Greatest Clits”: the “Walking The Line” album was a monster. Two discs filled with nothing but hits like “Why So Serious”, “Imperial”, “Dicks Pussy’s And Assholes”, “Requiem of The Fallen” and the incredible smash hit “Walking The Line”, which was crowned track of the year in 2009. Even after the immense success of “Walking The Line”, Tha Playah kept his hunger to grow and and deluded the entire scene with the release of his magnum opus “On The Edge”, his latest collaborations with Neophyte and the product of his studio sessions with Promo: “Open”.

Besides being an outstanding producer, Tha Playah is an approved demolisher behind the decks: his own unique style works out just right on a stage. It doesn’t matter if he’s being booked for a DJ-set or a live-act with MC Alee: Tha Playah represents hardcore excellence. He has performed on all major hardcore events. Decibel, Defqon.1, Masters of Hardcore, Thunderdome and Dominator have all been shocked several times by the Neophyte Records-artist. His own sound reflects perfectly behind the decks: he serves a set of his biggest smashes accompanied by unexpected tracks that are rarely being played. A set by Tha Playah is a guarantee for a filled and ecstatic dance floor, able to cause a massive shock. Making perfect sense: “He is the Mastah of Shock”!