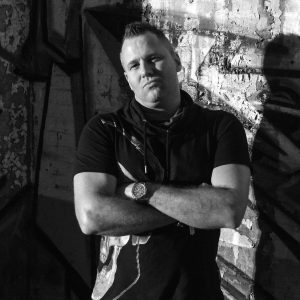 If there is anyone with passion for hardcore music and the crowd its Aggressive. With his big smile as one of his most remarkable features anyone can see that Aggressive loves to play Hardcore and party hard with everyone around him. Aggressive is known for the tons of energy he provides while playing on stage. He jumps and dances behind the decks and goes crazy with the crowd.

Aggressive can rely on a big amount of experience he gained over the past years. With a DJ-debut in 2007 at the big ‘One Man Half Machine’ event of his close friend Partyraiser, he was destined to have a future in DJ-ing. That evolved in bookings at events like Pandemonium, Ground Zero, Harmony of Hardcore & Together We Are Hardcore, and in 2011 Aggressive also made his international debut in Spain at the legendary Club Pont Aeri. Last year Aggressive became resident DJ at Toxic Sickness Radio with a monthly show.

His mixing skills are high standard and combined with his energetic appearance Aggressive has got the total package to make each party a success. Aggressive’s philosophy is ‘Party to the max!‘

He is ready for the future. Bring it on!!!