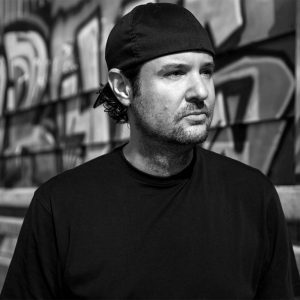 Godfather, Pioneer, Creator, Legend … there are many names and titles that are connected to and describe this man. One thing is for certain though (and that’s what all great producers of the first hour agree on): Marc Acardipane, born in Frankfurt am Main/Germany, is the first person responsible for breathing life into Hardcore-Techno-Sounds. The man behind PCP, currently living in Hamburg/Germany, stepped onto the scene 17 years ago under the monumental moniker of Mescalinum United and covered new, absolutely uncharted territory with “We Have Arrived”. Since then the German – whose name stems from his Italian grandfather – has released approx. 350 recordings under his name, which makes him the undisputed record holder in this scene. He owns the credits for countless brilliant tracks among which “Stereo Murder”, “I Like It Loud”, “Atmos-Fear”, “9 Is A Classic”, “Six Million Ways To Die”, “Drunken Piece Of Shit”, “Pitchhiker”, “Slaves To The Rave” and “Return To Zero” are probably the most famous.

His most prominent projectnames The Mover and Mescalinum United are only two of an endless army of nicknames (Marshall Masters, Inferno Bros, PCP, 6-Pack, Turbulence, Pilldriver, Nasty Django) which were used for literally hundreds of tunes – recorded for the now-defunct Frankfurt label conglomerate PCP/Dance Ecstasy 2001/Cold Rush. Marc’s material is mainly dark, brooding and mirroring the depressive emotions of its creator. It seems as if it is Marc’s destiny to use all means necessary to lift up the crowd with his music and turn their negative emotions into positive euphoria. Being an unheard prophet in his home country, Marc still commands fanatic loyalty in the Hardcore-Rave-Community in Holland, Italy and Belgium.