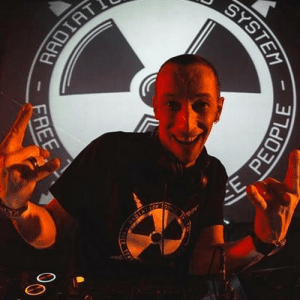 Techno fan since 1993, Psiko became a DJ in 1997. He co-founded the “Radiation Sound System” collective the same year and organized many events in the West of France.
Right from the beginning, Psiko tried his hand at all styles (drum’n’bass, tribe, hardtek, hardfloor, gabber, hardcore, schranz, etc.). Psiko soon turned himself towards frenchcore and artists such as Micropoint or Radium started to influence his music. He finally obtained a residency in a hardcore club.

In 2001, he set up a program in a “pirate” radio and, one year later, he decided to invest everything he had into the promotion of hardcore music. In 2004, Maissouille and Gobus urged him to produce tracks: he started to compose and released, between 2006 and 2008, about ten CDs and vinyls underToon’z Shop Records, ES Production and Audiolab Production.

In 2008, he became part of the Audiogenic label and released two vinyls shortly after: Radioactive EP (in collaboration with Gobus) and Disko Inferno EP. Thereafter, he mixed in numerous parties organized by the label and started to perform with the ones who had influenced him at the very beginning: Micopoint, Hellfish, Radium, Al Core, The Speed Freak, Maissouille, and many others.
His first 14-track album, Beat+Torture+Kill, was released in May 2010 and helped him to establish his status of composer.

In July 2012, he came back with Burning Playground: a mixture of techno, hardcore, dubstep, electronic sounds, movie extracts, remixes, female and male voices from videogames, tangy lyrics and prevalent trends. The young artist stuck his neck out for it! A completely free spirit but mastered music, in perfect line with the frenchcore style: “Let’s the frenchcore mutilate your brain!”.

Perfect for those who need a Psiko-therapy…