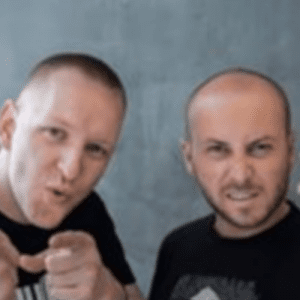 In 2009 two czech producers, Filip Houdek and Kryštof Babjuk, started project Hungry Beats. Initially they focused just on tribecore and frenchcore, but later also on styles like hardcore and terror.In 2010 they released their very first EP “Out of bounds” (PNR01) on their own new label Prague Nightmare Records.After a short period of time they released the follow ups PNR 02 – Lost 03 (including hits like “Head Crusher”, “Mad Joy”, “Hola Hola” and “Wrong Spiral”) they became fast popular artists hardcore scene in Czech Republic.

They cooperate with labels like Astrofonik, Karnage, Noistorm and Noteasytunes and released “I got something for your mind”, “Super crap”, “No Escape” etc.

In 2011 they became more succesful outside Czech Republic and performed at events like Raving nightmare, Together We Are Hardcore, E-mission, Footworxx vs. PRSPCT, Frenchcore sil vous plait, Therapy sessions, Xmassacre, Imagination festival and Koalition.

In 2012 French producer DJ Tieum offered to release their tracks on Altern- hate label, a sublabel of Audiogenic records.

In 2013 Hungry Beats released their first full LP “the beginning of hell”, which was more focused on hardcore than frenchcore.

In 2014 they had a collaboration with the cult project Rotterdam Terror Corps by remixing “Time to kill another one”. They performed at RTC’s anniversary party called “20 years Rotterdam Terror Corps”. Hungry Beats published their second album entitled “Harder Than you“ at the end of the year 2014. This album is pure frenchcore and has received great response from the frenchcore music fans.

In 2016 Hungry Beats got an offer from the Italian label Brutale. A sublable of the biggest Italian hardcore label Traxtorm Records. The track “We Had A Problem” entered the top10 in Hardtunes! The released their new album Futurecore with new Czech project The Butchers.

At this moment they are working on new releases, remixes and collaborations.