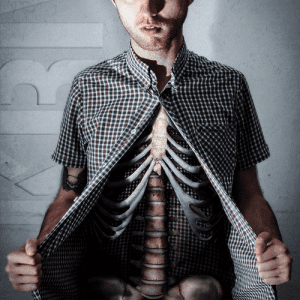 Amet professionally known as ”A-Kriv” was born in Rome the 9th of August 1992.
He fell in love with music almost straight away, from an early age and started developing a passion for Hardcore music and for ”dj- ing ” and the dj’s figure. In 2008 he starts having fun and buying his first Cd’s. He the then finds out his true passion which is Making and Producing Music.
He started collaborating with his friend also a music producer, Coremaster. The style they focused on was mainly ”Old School”. Amet wasn’t totally satisfied with the results yet.
In 2010 Amet also meets producer Staxs, so together with Coremaster they all three start building their own recording studios where they would produce new music, mainly Hardcore music.
Amet, Staxs amd Coremaster start building a fan base and creating a large Buzz within Rome and
The nearby towns, They change their name to Emergency Fuckerz. Their first gig was in a disco-pub
In the Tuscia Region close to Rome.
Amet then decides to go solo again
And starts concentrating on new material and new music projects. Amet’s new project is totally different from his first project, particularly is sound change.
2010 is a positive year in terms of development for Amet.He starts attracting attention and is then contacted by ”Colocon Circus”
A live events and promotions company based in Rome whom truly believes in his talent.
He starts DJing in famous clubs as ”ALPHEUS” and ”VILLAGGIO GLOBALE” .
People like Amet’s Music Style and Genre….They Simply love his Music
He is then contacted to DJ in regions outside of Rome like Brescia, Rimini and Florence.
In 2011 he is contacted by ”Fight Promotion” an Events an Promotions company equally
Important as Colocon circus. His personal Portfolio starts to grow and he performs is Clubs such as
Hollywood, Cyborg and Palladium. AKriv still isn;t satisfied by his success and signs a Record Deal with ”Avanti Rec”, one of the most important Record Labels in Rome. He starts working on new projects with ”Avanti Rec” and different International Record Labels.
2011 ends with innovation and nostalgia for AKriv as he decides to go back and reunite with the Emergency Fuckerz, but also collaborating with new dj’s and working on a different Record and also working on a totally new ”Industrial” Sound with International Record Labels.
2012 is a promising year for Akriv whom decided to go in to Advance Music Production and Technology studies in order to be a step ahead of his Competitors.
He also attracts the attention of Record Labels such as “VindictaRec” and “NeTunes”
The best has yet to come for Akriv…..
©2022 Copyright Cyndium | all rights reserved