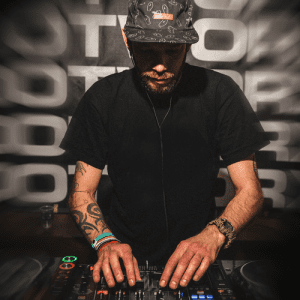 All the way from Australia, Tymon is in a league of his own as one of the front runners of hardcore industrialists. With his truly individual sound of controlled chaos, Tymon brings the noise with pounding rhythm and smashing kick drums that have now become his trademark at the biggest events and parties around the world.

Involved in the hard music scene since the 90’s with decade of playing at underground events to the biggest parties all over Australia, after years of dedication in the studio, Tymon signed to Industrial Strength Records in 2006 he now brings his unique industrial sound to Europe, with live performances and on the decks containing the same ambition which can be heard in his production.

With a passion for distortion, his amazing talent in production, devastating performances and the stand out nature of his style, Tymon has smashed his way out of the southern hemisphere and quickly made a massive impression in the worldwide hardcore, industrial and techno scenes.