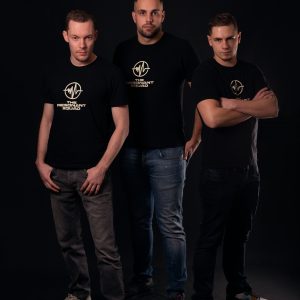 The trio The Resonant Squad was founded in 2016 and consists of Speedy Lô, Undunn, and Maarten Sluis.

Before 2016 the three men were already creating music in the proverbial and literal ‘attic room’ where they wanted to try producing through a passion for Hardcore. After much trial and error and hours of musical sparring, the first tracks were put on Soundcloud in 2014; And that did not go unnoticed for long. Over time, their tracks were played by renowned DJs who could appreciate the new style ‘Early Hardcore’.

In early 2016, they received a call asking if they wanted to perform at a party called ‘Decade, The Halloween Edition’ in October. Maarten and Undunn had no shooting experience at the time, but the three said wholeheartedly ‘yes’; That was also the kickstart for their DJ career. Their first performance was so well received that the men were immediately invited to the next edition in March 2017.

2017 was a big year for The Resonant Squad where they performed at parties such as Retrospect, Ground Zero, Decade, and many others. After performing on Retrospect they were approached by Cyndium and not much later the collaboration was born.

Since then, The Resonant Squad has developed its music style into something unique and recognizable. Energetic and danceable is what their music stands for. New Hardcore with a nod to the past. Their DJ career also expanded to parties such as Ouwe Stijl Is Botergeil