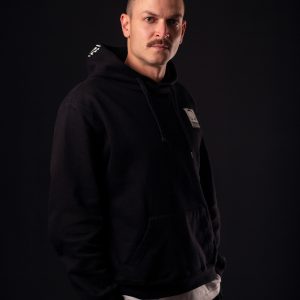 Daniel Rønhave, better known as Peckerhead is working the turntables since X. With tireless energy and a good understanding of the genre’s standards, his productions are always worth listening to.

From the very beginning, Peckerhead travels through Europe where he is pushing the limits of electronic music. From the early ninety’s hardcore genre to his own powerful productions and to a more extreme concept ‘’fast and hard’’. With his unadulterated energy he is your main man in the studio and on stage.

Although Peckerhead left Copenhagen and Denmark for an unknown time, he’s still busy with KØBENHARDCORE as the crown jewel of his remains in the Danish everyday life. Since moving, he shared the stage with many artists who have a great influence on the hardcore culture of The Netherlands and the world.

Now residing in the birthplace of Gabber music, Rotterdam, Daniel is even furthering his growing reputation as a rock-solid purveyor of top-notch releases on Mokum & Cenobite records, etc., and thanks to his positive presence also becoming an audience favorite in- and outside of The Netherlands.