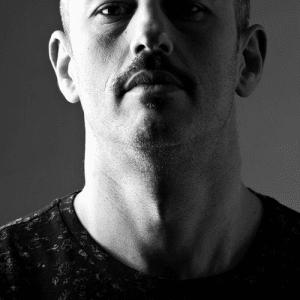 Markantonio is one of the most leading and renewed djs of the International techno scene. Flagship of Naples circuits, Markantonio starts playing with decks since he was fifteen; only four years later his talent explode in the beating planet at the feet of Vesuvius! So, in late 90’s Markantonio’s name spread around and enter the most exciting parties of Naples while record labels like Recycled Loops, Shake rec, Tortured, Conform, Superbra, get very fascinated by his tracks. In 1999, the ep ‘Fried Mix” in cooperation with Davide Squillace marks his official entrance into the music world and later soon comes ‘Appendix A”, the first record produced on Southsoul Appendix label.

Markantonio has a special music taste, always careful about techno universe changing’s. His performances convey a rare energy made of a soft fusion of high bpm beats and acid funky, which create shrill grooves and bass lines. One of his attitudes is the use of three decks together with his talent for a strong alteration of the sound in his rhythmic combinations, likewise, the ability to smooth down any melody element, through a clever use of the mixer Xone 92.

The pleasure of working with big artists like Rino Cerrone, Davide Squillace, Paco Osuna, Valentino Kanzyani, The Advent, Ignition Technician and many others, makes him improve again his skills. Thus, in 2001 Markantonio create Analytic Trail, his own record label through which he develops and enclose all his expanding potential. Besides from Cerrone, Osuna and Squillace, the Label gets also gradually other rising talents like Luigi Madonna, Flavo Diaz, Alberto Pascual, Alessio Mereu, Simone Tavazzi, important international techno artists like Joseph Capriati and foreign producers such as the duo Collins & Behnam or the high-flying Hans Bouffmyher. Markantonio Analytic Trail opening ep ‘The Beginning”, shows soon a powerful technoid charm while the second ep ‘Subsequent ep”, together with his friend Rino Cerrone, is an a high-spirited one. ‘Percussion Mission” embody Markantonio tribal mood, then ‘Atome ep” with the legendary Paco Osuna, gives further glamour to the label, enlarging his importance. Finally the ep ‘Total Impact” confirm, once again, the good relationship with Rino Cerrone. Analytic Trail music form gain energy from all the dj set lived not only on the electronic sets of Naples, but also all around Europe and then as far as the Old World.

About 30 production released in ten years, highlight a solid and lasting power. Every single rhythm section is characterized by an obsessive care to details and sounds. This project uses its energy vocation in the research of a groove with effect on techno music; it’s an idea, an expressive urge which has risen the interest of the most electronic artist of new millennium. Just of great relevance ‘Molotov” composed by Markantonio and Joseph Capriati, was played even by Richie Hawtin in Love Parade opening in Berlin. Then, also a substantial distribution both for vinyl and digital with the aim of supporting their releases with a massive promotion. The motto is: ‘Groovey tracks engineered for the dancefloor’! The desire of join past and present, techno and minimal-house, acid and electro-funk, leads to the creation of a second record label MKT, with the first ep ‘Future Shock” by Markantonio – confirming his high production capacity. Then, in 2007 the cooperation with Mauro Picotto and Riccardo Ferri’s record label – Alchemy, marks his landing on Ibiza and in 2008 Markanotnio performs with ‘Analytic Trail” showcase at the celebrated Privilege. Joseph Capriati will join him also in the production of ‘Codice Morse” and ‘Molotov EP”.

Summer is close and the first official compilation is produced for the best club of south of Italy ‘La Vecchia Fattoria’, meanwhile follow several productions of minimal – techno music for both MKT and Analytic Trail. At the same time many works are carried out abroad such as two releases on Alchemy Rec, excellent remixes like ‘Happily” with Capriati, ‘Pepperoni” with Cristian Varela and the recent ‘Airtight” of the duo-trio Deepgroove & Jamie Anderson. Equally, Markantonio attends at many important festivals like Cramfield, Awakenings and the illustrious Electrobeach of Benidorm and his tracks appear on great success compilations such as ‘I Love Techno 3 – Dance Club”, ‘Essential Underground Vol. 09″, ‘U60311 Compilation Techno Division Vol. 5″, ‘Amnesia Ibiza Sessions Vol 8″, ‘United DJs Vol.3″.

Markantonio plays all around Europe, through his ability to meet any clubber needs and more, his talent in managing, with glamour and elegance, the tech-house minimal appeal.

Recently, Markantonio has also carried out the project ‘Junction Hands” born in 2006 in collaboration with Rino Cerrone, as divertissement in several happenings. The idea to ‘cross their hands” seems almost a provocation, a new challenge, again, launched through the awareness of their own resources and an unlimited inspiration. From this project has been created the namesake track included in the various artists ‘Napoli Connection” on Drumcode and the ep ‘Revolution is back” produced by Unrilis. In addition to the already proven duo, here comes the rampant Joseph Capriati. The three guys combine all their technical expertise through a mega show, called “Neapolitan Gangsta”. This is a real techno band promising sparks in the best international circuits!