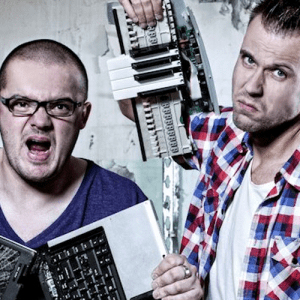 State Of Emergency started in 2008 as a co-op between Maurice Daniluk and Tristan Oude Voshaar. Their first releases were on their own “Raw Fuel” imprint. Some of you might remember tracks like; “Back To The Basics”, “For The Headstrong” and “Our Remedy”.

Their remix of “Riotstarter” by Angerfist really put them on the map. This remix was released in 2011 and received support by a lot of DJ’s and ended up in the top 10 of the annual MoH radio Top 100 of 2011. In February of 2011 the guys signed a record deal at the mighty Masters of Hardcore label which resulted in releases like; “Crack It”, “Addiction” and their remix of “Superior Minds” by Eastside Connection.

In 2012 came an absolute highlight in their career. They had the honor to produce the track; “The Vortex of Vengeance”, which was the official Masters of Hardcore anthem of 2012.

State of Emergency performed at stages of events like; Masters of Hardcore, Dominator, Defqon 1, Emporium, Bassleader, Free Festival, Hardcore4Life and many more.

We don’t know what the future holds, but keep an eye on these guys!