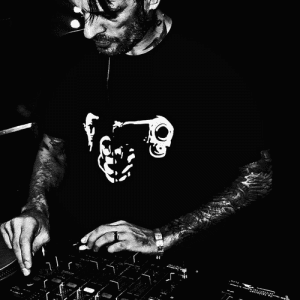 Main character of the international hardcore techno scene, Manu le Malin is the symbol of the struggle of a musical genre for its own right to live. He has overcome hardship and made his way in life since this evening of 1991 where Manu, who was dragged along by friends, discovered “raves”, their relaxed atmosphere and their new music. It was a genuine disruption into the life of this young Parisian who was just 20, and who decided to change his life.

Exit his first love for alternative rock, punk and ska music. He decides to dedicate himself body and soul to Djing, and must find a stage name. It will be Manu le Malin referring to the movie “Les Freres Petard” of Herve Palud. He quickly appears on stage in the growing free parties next to the Psychiatrik sound system, or in the raves of Le Bourget, or during the mythical after parties of Pont de Tolbiac.

His music, originally techno/trance, becomes harder and darker with the arrival of production labels such as PCP and Industrial Strength, which then develop a new sound: hardcore. Having an innate sense of groove and an outstanding technique, he soon can see his fame spreading abroad.