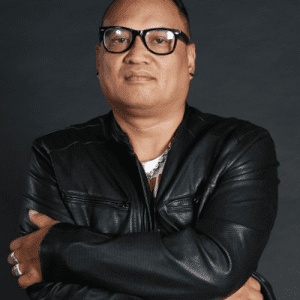 Ferry Salee (DJ Gizmo) was born on June 3, 1965 in The Hague. When he was 12 years old he started a drive-in show, which he Disco, Soul & Funk played at celebrations of hockey or football constrictions and schools. This resulted in a job at the Roller Disco in The Hague in 1983, where he turned Hip Hop. He was always interested in music and working with his turntables and of course with scratch! In 1988 Ferry has signed up with a mix match of Avro’s 3 Times by turn of Jaydee. There he was fourth behind Jean who was 3rd, Michel de Heij (2nd) and Erick E (1st). During that time he played for many clubs.
In 1989 he came into contact with the “house” and began to turn in big clubs like RIU Palace & BCM Mallorca with King Bee & Carl Cox and The Space in Ibiza.
In the Netherlands he started at Club 61 & 71 in Noordwijk and then in the Bios in Amsterdam with Alex van Oosterom & King Bee and later at the Blue Inn Studies in Rotterdam, along with Paul Morales and Hithouse. Around 1992 there was a new style of music, the ‘gabber’ and from then handled the career of DJ Gizmo. He always came in with Park View Darkie where DJ Rob & Paul Elstak always turned. Rave the City, Thunderdome was not much later he was the last member of The Dreamteam with Buzz Fuzz, Dano and The Prophet! This famous DJ team had when all gigs all over the world.