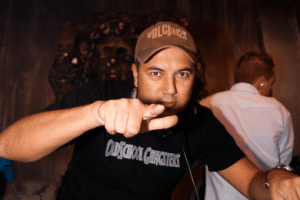 Rob grew up in a small village in The Netherlands. Nothing much happened there really, but he did learn that one doesn’t achieve much without working hard. He true loves to work hard and spin records as much as possible; sleeping is for later he is a workaholic as well. Therefore, his colleagues know him for his no-nonsense & ass-kicking mentality.DJ Rob was one of the first DJ’s to incorporate the famous drum computer TR909 with 12″ vinyl mixing. At this time at one of the many live performances, the legendary track “The Beat Is Flown” was born, nowadays seen as a big classic from the beginning phases of house music.In between those years, DJ Rob together with his MC, MC Joe, performed as a resident at Club X in Belgium and after this experience all thinkable raves and parties all over the world and together they are an unbeatable combination.DJ Rob together with MC Joe, continues to thrill crowds wherever they perform with “early rave/oldschool classics combined with Harder Styles of Music”.
Nowadays DJ Rob has been very busy with a lot of productions like hardcore, Hardstyle and House/Dance releases.Currently he’s busy in his own studio, “The Noculan Studio’s”, where he continues with Brad and his team to release many diverse and hit records!