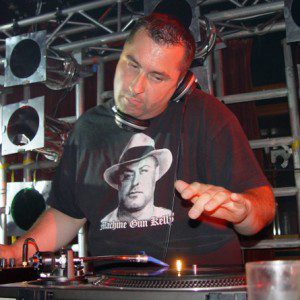 Rob gee is famous in new york as "the hardest dj to ever play the limelight." in the early 90's, Gee kept delirious audiences going - spinning at limelight's "future shock" dance/techno nights and performing with his live band and spinning at the club's "rock and roll church" metal/rock/industrial nights.

Gee kept the crowds coming back to Limelight, just like they do in Australia, Japan, Italy, Spain, Scotland, Austria, Hungary and Belgium to name a few. Gee is a recurring headliner at Sensation, Thunderdome, Mysteryland, and Love Parade, where he played before one million people.

Gee has shared the stage with everyone from hatebreed and Biohazard to Crystal Method, Busta Rhymes, Kurtis Blow, and Afrika Bambaataa. His Geeness has also has spun at many Slipknot and Korn after parties.

Rob gee is the only artist of his kind to collaborate and create with members of respected rock, metal, hardcore and hip-hop acts such as Slipknot, Hatebreed, Biohazard, Wu-tang Clan, Cypress Hill, and system of a down creating a unification of electronic, metal, hardcore, hip-hop, and any other style for that matter known as gabber music.

Gee is writing history launching gabber onto the world scene. Known as the gabber guru, Gee gained worldwide fame after the release of “Ecstasy you got what i need.” the song went gold and was the #1 video on The Box for 13 straight weeks. At the same time, “Ecstasy” rose to # 9 on the pop charts and earned him best artist, best producer and best song of the year at the Thunder Awards in Holland.

Gee has put out over 50 releases in the past decade on various labels including Adam (aggressive dance and music) Worldwide, his self-owned label.