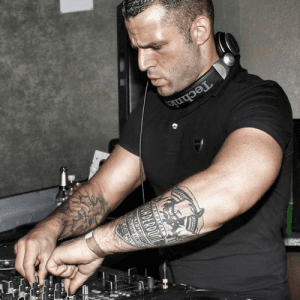 Psycho Killer is a upcoming hardcore, frenchcore and terror producer. On his 11th he got his first Thunderdome cd. From that moment the passion for the music was raised. 5 years later he went to his first Hardcore party. Afterwards he started to try and mix the music himself. In 2012 he started a duo with a friend, soon they got their first bookings. In a regional youth center he signed up as dj, and began to learn how to work with the CD players. Quickly the first bookings as solo artist came in.

In 2013 he became known under his old alias, Wish-E. And made his debut on Invaderz. But he wanted to focus more on the sub-genres of the hardcore scene. So his first act in the sub-scenes was on Frenchcore Psychophats. Now in 2014 he will go on under his new alias: Psycho Killer.

Psycho Killer will produce hardcore, Frenchcore as well as Terror. Also he is preparing for a few live acts, for frenchore & industrial hardcore/terror. He wants to give the scene a new sound, and for this he will spend a lot of hours in the studio. Some collaborations will follow with a upcoming hardcore dj as well as upcoming Frenchcore duo.