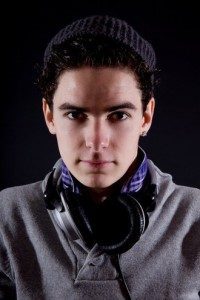 Prankster started producing at the age of 16 with an apllication called Fruityloops. After a few years of just messing around he decided it was time to do something usefull and finish a track for once. Around this time DJ Neophyte introduced a remix contest for the 100th release of the mighty Rotterdam Records label. Prankster, for the first time ever finishing a track, won this contest and signed a record deal at the same time. "Neophyte - Execute (Prankster remix)" was released in the summer of 2007.

In the summer of 2008 his first solo release became fact. "Prankster - Life of Crime" E.P. was released on Rotterdam Records and DJ bookings started to pile up. After the release of the Nightmare Outdoor 2010 anthem remix (Ophidian - Lost in the Forest (Prankster remix)) in may 2010, he decided it was time to start producing intensively.

This resulted in the release of the "Prankster - Blood & Tears" E.P. on the new Neophyte Records sublabel; Adrenaline Tracks. The titletrack featured on many compilations like "Thunderdome 2011", "Black 2011" and "Project Hardcore.nl" and is considered his first hit-record. As a result Prankster recieved various bookings on some of the best party's the hardcore-scene has to offer; Defqon1, #PH12, X-Qlusive: Noisecontrollers, Fantasy Island and Freaqshow.

In januari of 2013 a new release together with new kid on the block Synthax followed. The "Prankster & Synthax - Unity" E.P. was released to the masses and was recieved really well. More releases and remixes are planned for 2013. Prankster is back with some new hardcore beats and performances for ya'll to enjoy!