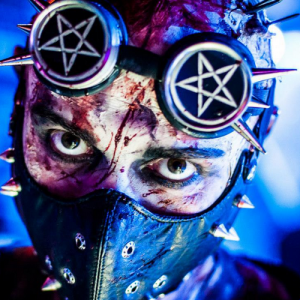 Omkara Techichi has the ability to appeal to an extremely wide-ranged audience due to the large variety in styles and uniquely sounding tracks. Despite his great respect and appreciation for Meta4, Omkara decided to leave this label in order to release a gigantic album on Red Fever Recordings, which has been released on the 10th of October.

It all began years ago when Omkara Techichi made a name for himself through his releases on Explosive Records (The Future Is Final EP) and Hellbound (The Darkside). Having been granted much praise about two particular tracks ‘Digital Torment’ and ‘Twisted Defiance’, Omkara decided to press on with his experimental sound, shortly resulting in a release through Cardiac on Meta4, an equally unusual record label with many audio challenging engineers.

‘Nocturnal Stasis’ on Global Pandemic was the first Omkara Techichi track to be promoted on Meta4, promptly followed by ‘Undefiled Wisdom’ on Albuminurophobia and ultimately his solo EP release ‘Metaphysical Ressurection’, which was well-appreciated in the more industrial-orientated corners of the hardcore techno scene.

Nowadays, Omkara Techichi’s goal is to bring forth a daring combination between mainstream hardcore and industrial darkcore, sugar-coated with an undeniable layer of fantasy/horror-styled atmosphere and vocals. Not only his ideas have evolved, but his overall sound quality and engineering skills as well.