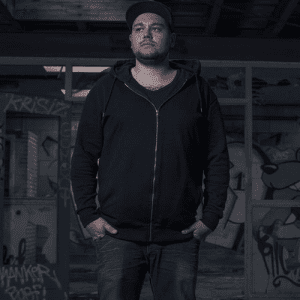 Luxxer (Rutger Denijs), born and raised in the rough streets of amsterdam in 1989 began with his interest for electronic music through his brother, who had a large collection vinyls ranging from techno, acid, trance, harddance and hardcore/gabber. The search for the ultimate sound began, he looked in all corners of the electronic dance music spectrum, but always came back to the three most fascinating to him:
Drum&Bass, Dubstep and Hardcore. After watching his brother, friends and his personal heroes behind the decks and on stage, he decided to take the plunge and invest in two turntables a mixer and some decent headphones. Day and night he practiced and experimented, combining styles to see how far he can stretch the acceptable confines of several styles. After a year or so practicing on the decks, he wanted to expand his creative vision and invested once more and invested in producing software, some good speakers and a whole lot of patience.
Of course his first tracks were not the best tracks in the world right away, however people could instantly recognize his thrive for innovation, dark atmospheres, pumping basses and scintillating sounds.
After years of practice, and playing at small venues from time to time making tracks along the way one of his best friends secretely made an appointment for him to play at Thunderdome Radio.
His friend quotes: ‘I don’t like people that waste their talent, so I gave him a huge kick in the ass, and it worked.” (Jean Luc Grassere, 3DJL) This was such a motivation for Luxxer, that he decided to send some tracks to Noisj.NL recordings and they instantly loved his style releasing his first record short after.
He continued to produce at an intense pace, causing him to make his first chart busting record ‘Hightech Lowlife”with such tracks as ‘The new you” and ‘Dotconnector” (which was featured on the 2014 “Dominator” compilation album).
This got him some attention, and he has finished or is working on several projects ranging from remixes, sound design for party trailers and dj intro’s to collabs. He’s never satisfied, and will always be looking for the ultimate in everything he does.