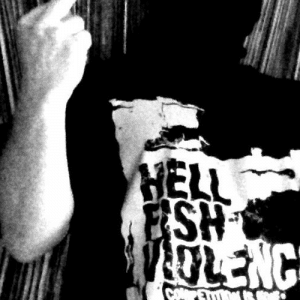 Unforgivably Hellfish escaped from his sedation unit in 1987. Claims since that he’s been practicing the art of turntabalism and of links with various underground record labels remain to be proven. Most of the original scientific team express doubt that he could co-exist with the general public and more likely to be hiding in a cave somewhere in central Asia.

Strong evidence has come to light linking the Hellfish subject with an underground hardcore record label. Allegedly founded in 1994, Deathchant Records is widely believed amongst international intelligence agencies to be a facade for a highly dangerous audio cleansing guerrilla movement hell bent on ridding the planet of the plague of sub standard mainstream dance music. Pete Waterman has reportedly to have personally placed a six-figure bounty on the head of Hellfish, with or without his body.

Numerous sightings of the outlawed organization’s hideous king pin have lead investigators towards the view that the war on audio is now being fought from France. Given the countless hardcore events occurring weekly across the country, and the unwilling of the French authorities to act against this fiend, there seems little hope of an imminent end to this despicable audio assault.