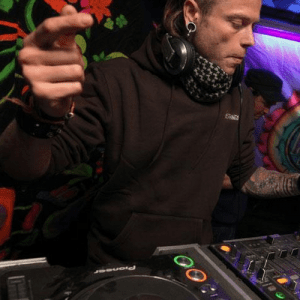 The character of Hanuman teaches us of the unlimited power that lies unused within each one of us.

Vidyadhara ( in hindu essentially spirits of the air), a natural being …

Tim Van Es born in the south of the Netherlands 1986 starting to collect music at very young age,after he had a wide range of psychedelic trance his passion grows and the music choose him !! starting to deejay around end of 2009 only and already played in several country’s like : UK , Spain , Portugal , Greece , Germany , Denmark, Belgium and INDIA (GOA)

His sets can be described as heavily groovy psychedelic but also depends on the time he play, in 2012 joined Unio Mystica based in belgium and resident dj of the crew , in 2013 the spanish label Maharetta records and next to being a label dj for Maharetta records He nowadays producing his own tunes and working on his V.A compilation that is coming out this year on Maharetta records***
aswell he joined Equinox this year a dutch party organisation that trow some serious party’s in the netherlands with top notch artists.