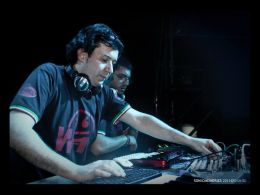 Walter One can be considered an “enfant prodige” of his genre.
Walter started in 1991, releasing the “Precious X Project” with a single called “Dukkha”. This record became an instant hit, and brought him at the top in charts around the world.
Thanks to this, he has been performing side-to-side with great artists like: Aphex Twin, Frank De Wulf, DHS, PCP, Defcon, Laurent Ho, Lenny Dee, Chosen Few, Dj Dano… he was renowned for being able to perform live (real live) with only 2 Casio FZ1 and a Roland DJ 70.
Walter can be a proud artist, responsible more than 20 releases, from techno to trance, to hardcore, and his presence has been amplified by the endless licenses on hardcore and hardstyle compilations in many countries.
Just think of Mokum 71 and Mokum 78… two real bangers. His style is gabbeeer! Super high energy.