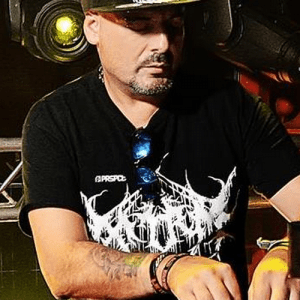 His career goes way back to 1984 when he starts experimenting with electronic music. He starts just with a 4×4 beat with sequencer and a synth (Casio, Korg, Roland, Yamaha…), a guitar and a microphone making technopop, electroclash and EBM.
But not just the electronic part of the music scene had his interests, but also analog stage music like Hard rock, Punk, metal, Rock Nuwave ect is being a influential part of his life, as he performed as a singer in more than 15 bands in the mentioned styles from the age of 14.
Combining these two parts of his life brought him to his sound what we know today as Tribecore/Hardtek/Frecnhcore.

Around 1988 he had his first experiences with the rave scene by coincidence, as he was a big fan of joy division and factory records and he was present at Hacienda in Manchester, during the summer of love. During this period his discovers the Technoid tunes, Acidhouse music, and rave music scene in UK and het gets Hooked.
At the beginning of the 90’s he also discovers the free party scene, and in 1996 after visiting many dance/house/free parties, and being totally addicted to the repetitive beats, he finally decided that he want to perform and entertain people by himself with his music, and started his live act career.