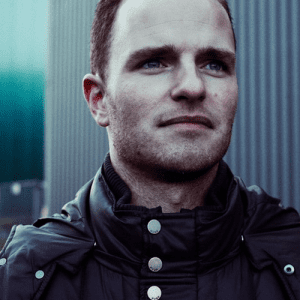 Rude Awakening (Sebastian Hoff) has become an important ambassador of the hard techno scene
with his innovative work. Each time hardcore threatens to bite itself in its tail, he shakes up the genre
and moves it beyond its borders.
After the notorious Promo Files split up into two sub-labels, 2001 marked the introduction of Rude
Awakening to the electronic scene. With already a career of almost ten years behind him, Sebastian
Hoff decided that the time had come to face a new challenge. From then on Sebastian Hoff continued
his dark, hard and more industrial orientated productions under his Rude Awakening alter-ego. A
name which originates from Hoff’s experiences at the legendary Awakenings parties in the former
Gashouder in Amsterdam.
Since then, Rude Awakening has been expanding his discography of hard techno experiments on the
r_AW records sub-label of The Third Movement. In the summer of 2005 the first Rude Awakening
album saw daylight when ‘Forward observer’ was released. Receiving critical acclaim for its fresh and
diverse sound, the album also won a nomination as album of the year by ID&T Magazine. In 2008 the
next Rude Awakening album will be unveiled, ‘Fragments of the future’.
With its introduction the Rude Awakening sound could be heard on many different stages. To
introduce the music to a sometimes unsuspecting crowd, the Rude Awakening world tour was
conceived. Highlights of the tour included performances abroad and the hosting of a stage at the
legendary Mystery Land festival. After it became clear that not every hardcore follower was open to
this mixture of styles, Sebastian Hoff decided to take Rude Awakening underground and baptized it
Club r_AW. Rude Awakening, or r_AW as its abbreviation stands, has since its foundation evolved from
artist, DJ and label into an event all bearing the same attitude. An open minded approach to pure
and raw music. Since the first edition in 2004, Club r_AW has had a long line of very successful nights
at the P60 in Amstelveen.
Combining the harder genres of techno, drum and bass and industrial hardcore into a mixture of
funked up tweaks, heavy kicks and dark emotional breaks every Rude Awakening set is an
experience on its own. An experience which reached as far as Awakenings, Defqon 1, Decibel and
many more events in The Netherlands and abroad.