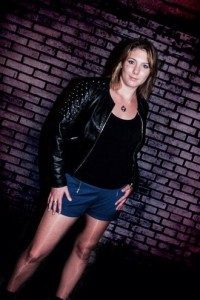 Linda Wouterse a.k.a DJ Rheeza was born in 1984 in Axel, a small town in Zeeland. Since the year 2000, after moving several times, she lives in the capital city of Noord-Holland, Haarlem. In 2001 she met the resident DJ of a club in IJmuiden, DJ Rydell. She was impressed by the entertaining performance and all the awesome DJ gear in front of her. Together with her passion for harder styles, she immediately knew she wanted to become a DJ. So she bought 2 turntables and a simple mixer in 2002 en started to practice.

Back in the days she played old school & hardstyle, better known as Early Hardstyle now. In the summer of 2003 she went to Tenerife, to work there for a while. She took her records with her. On the day of arrival she was already performing at a popular club in Playa de las Americas. During her stay in Tenerife she became the resident DJ of the club. In Holland she had gigs in and around Haarlem. Searching for new challenges, she also started to play Hardcore and Early Hardcore.

People began to notice her fast mixing skills, style and choice of records. She met the bigger artists in the scene like; Bass-D and Buzz Fuzz. Between 2003-2005 she won several DJ contest en performed more and more at bigger parties. She’s also a very good Early Rave DJ and quite popular in this style which she is spinning for years now. She had performances at well known club & party locations in Holland, like; North Sea Venue, Crystal Venue, Club X, De Waakzaamheid, Empire New York, Borchlandhallen. A couple of these gigs are: Hellbound, Ground Zero Festival, Scumworld, Lockdown, Fucking Bastards & Reng Deng Deng.

Her focus and main style now is mainstream/industrial hardcore. Just like DJ Rheeza’s early rave sets, is her mainstream & industrial style quite up-tempo, energetic en loud! There’is no doubt she is one of Hollands most experienced female DJ in the harder styles. Her fast & energetic DJ sets has proven many times that this lady definitely knows how to rock!!