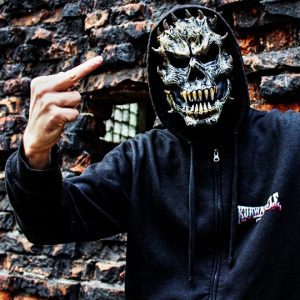 Started making music in his childhood, with a PSX game/DAW called “MTV Music Generator.
In 2003 he also bought the PC version and started to produce Old-school Hardcore and Early Reverse Bass Hardstyle.
During the years 2004-2005 he made several tracks, but just for fun.

In the beginning of 2006 the name “Kurwastyle Project” was born and he started to produce Speedcore influenced by artists like USN, Pain Alliance, Komprex or Passenger Of Shit.

In August 2007 he founded his own underground netlabel Splitterblast Records, which was specialized in Extreme Speedcore & Extratone music,
on which he released his first full-lenght EP in 2009 called Das Ist Splitter. This helped him to get more attention in the scene and also his first live-shows in Germany.

In 2011 he stopped producing for a while due to the several personal reasons.

In 2013 he returned and started to learn FL Studio.
In April he also opened a new label with his friend from Japan DJKurara called KyokudoCore Records dedicated to spreading and supporting J-Core music.

Due to fast learning and increased skills he released his first CD Album in February 2014 called Lost In Society”.

In 2015 he started producing Terror and in February 2016 he released his first track on Noisekick Records followed by the release of “Do You Wanna Balloon? “on DJ Smurf’s Deng Deng Recordings.

Until now he played on the several parties in Poland, Czech Republic, Netherlands and Germany along with the names like: SRB, Noisekick, GFB, DJ Hidden, DJ The Producer, Drokz, Brainpain, Divtech, iGoa, TerrorMasta, and many more.