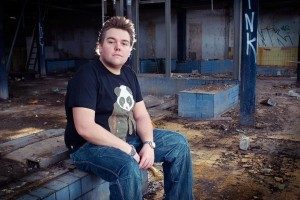 As we all know by now Cor Fijneman’s, was born on 9th of april 1977 he was born in Holland, career started in a tiny little club called Spock in his hometown Breda. He played there every Saturday night for 4 years and this was the base for the typical “Outstanding” style he still plays today: a mix of raw trance, house, techno and upfront electronic dance music.

Nowadays he plays all over the the world but there’s one thing that never changed: He is still full of energy behind the decks and enjoys it as much as the audience does. By now Cor has played in clubs all over the world these last years, just a few examples are Cream Amnesia Ibiza, Club Glow Washington DC, Godskitchen Birmingham, The Gallery London, The Matrixx Nijmegen and Illusion Lier. Besides these venues Cor played not only at all the major festivals in Holland like Trance Energy, DanceValley, Mysteryland, Impulz, Fabulous and Innercity but also at festivals outside Holland like WEMF Canada, Lloret Outdoor Spain, Illusion 16 Years & 17 Years Belgium, Cream Digital Love United Kingdom, Club Space WMC Miami, Loveparade Germany. In 2006 Cor travelled the world together with fellow DJ Mark Norman for 80 days. They flew all around the world in this highly acclaimed tour that was named as one of the most unique concepts of 2006 by Holland’s most leading magazines.

But also on the production side Cor is one to watch. The single that turned all the attention to Cor was his single, Venus (Meant To Be Your Lover), a collaboration with acclaimed singer and trance diva Jan Johnston. With this hitsingle Cor Fijneman has entered charts around the globe and received support from dj’s like Paul Oakenfold, Judge Jules and above all Tiësto. Most of all, this single was the theme of the illustrious and first Tiësto In Concert event, May 10th 2003. This resulted in many requests for remixes for acts like Jurgen Vries, Lasgo, Andain and Three Drives. These remixes proved to have the right sound and were supported by many dj’s like Judge Jules, Ferry Corsten, Marco V, Johan Gielen, Paul Oakenfold and Paul Van Dyk. After this track Cor really went crazy in the studio and this resulted in 2 major trance anthems: Healing together with acclaimed singer Anita Kelsey and Don’t Break My Heart together with Romy. The last one was chosen as Anthem for the TMF Awards show in Belgium in 2004. Cor also performed @ the awards pre-party and this one hour set was broadcasted live in Belgium and Holland. A year later Cor was nominated as best foreign DJ at these same TMF Awards. He was nominated together with Tiësto, Armand Van Helden and Roger Sanchez.

As we all know Cor’s DJ sets are very versatile so this means Cor also produces a lot of different styles. Late 2004 Cor Fijneman started his own label at Black Hole Recordings; Outstanding. Outstanding was formed to show Cor’s more darker and techno influenced side. The first 12” Hot Wired/Fuzzball was released under Cor’s alias Silence The Sneak and was supported by dj’s like Judge Jules (featured on his mix compilation), Marco V, Johan Gielen and Tiësto.
The second release; San Andreas/San Pedro, a co-production with Jochen Miller was a huge follow-up and extremely successful. San Andreas/San Pedro was played by almost every DJ and is still being played at this moment. More releases followed and all in that typical Cor Fijneman Sound. Cor also hosts a radio show by the same name and is broadcasted already at more than 10 radio stations around the world. Also he is doing sets for several other radio stations around the world regularly.

Spring 2005 saw the release of Cor Fijneman’s first official artist album; Monologue.
It’s the result of over ten years of hard work and is released on Cor’s own label within Black Hole Recordings, Outstanding. This album was very well received and proved that Cor could produce in a highly diverse way.

In 2007 Cor gave the world another big smash hit. He produced the track Jaguar, based on the old Detroit classic Knights of the Jaguar, and this was released by Spinnin’ Records. This track was played all summer by DJ’s like Ferry Corsten, Sander Van Doorn, Tom Novy, Tiësto and ‘King of Progressive’ Sasha. This resulted in another release with Spinnin’ Records that was released at the beginning of 2008: Disturbed. This record also draw the attention of all the major DJ’s. Cor also teamed up again with Jochen Miller and they released the track Rocinha on Massive Drive Recordings. This track is already picked up by DJ’s like Marco V and Sander Van Doorn. More releases to follow so watch for these tracks at your favourite download portals.

In 2008 Cor will join the Black Hole Tour throughout the world and he will play again all over the world to give the crowd his ‘Outstanding’ sound. So check those flyers and watch for his name @ your local club because when Cor starts playing your feet will not stop till the last beat drops.