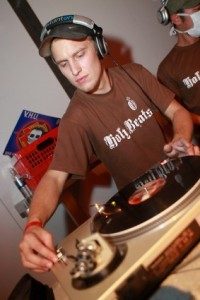 Bruno grew up in the city of Haarlem [Holland] in the 90's: A period in which hardcore's influence was rapidly diminishing and eventually almost came to a stop, due to various events and developments in the scene.

As the hardcore scene was rising up again, Bruno quickly got hooked and started listening to tracks from various artists, also the newer dark hardcore styles got his interest. But after buying his first set of turntables and a flightcase filled with early hardcore vinyls, he totally fell in love again with the raw sound of the TR-909 and the screaming Juno that were so typical for this period in hardcore, loved by so many. From this point on, his love for early hardcore grew bigger every day. He started playing at various illegal underground parties, until in 2004; when he had his first official gig in Holland.

After this gig Bruno immediately got the taste of it, started to play more and more, eventually won various DJ contests in the country and had gigs where he got to play back to back with top notch artists such as Chosen Few, Leviathan and Dano.
In ’08 and ’09 things moved upwards; Bookings started to come in from abroad [e.g Germany, Belgium, Switzerland] and Bruno joined the crew behind the scenes of the successful Dutch early hardcore event ‘Holy Beats’ where he became one of the resident DJ’s. Later that year, Bruno made his debut on the legendary party ‘Earthquake Festival’ in the ‘Turbinenhalle‘ Venue in Oberhausen, [Germany].

Nowadays Brunoxide is performing as much as possible, experimenting with blending other harder styles of music in his sets, to create an even more unique sound. He works totally dedicated, and is focussing on producing his own music, to be able to express his love and feeling for the music on the highest possible level.