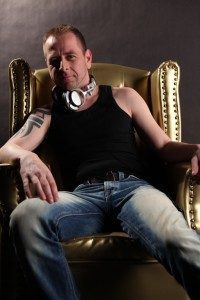 DJ Beagle started his career as a very talented newcomer dj at the legendary "Bunker (Berlin)" in 1993.

He quickly made himself well known and became a part of the hardcore scene. For a decade from 1994-2004, you could find him as DJ & Liveact for the “Gabba Nation” in different clubs.

In 1996 he founded the eponymous label “Gabba Nation Records” which was one of the most successful german hardcore labels locally and international.

Apart of the releases at “Gabba Nation Records”, he produced different tracks for labels like “WAR Rec.”, “Violent Rec.” and the french label “Psychik Genocide Remixes”.

Through different performances at the Loveparade(1995) and Army of Hardcore in Oberhausen (1997), the media were interested in the newcomer from Berlin.

He also played at the Fritz Love Radio and was a resident on “Marusha’s Rave Satellite on RBB .

In this time Beagle grew up to one of the leading Berlin hardcore DJ’s.

Later in his career, he became a resident in Tresor (old), Pulp Mansion, Beach Grünau, etc.

Since early 2009 you can still find Beagle as resident dj in a series of events called “Friedlich Feiern” at the M-Bia Club Berlin.

Through the love for music Beagle with Miss NightKat at the end of 2011. He recognized that she was a very young talented DJane and started to support her. In April 2012 he founded a new label called “Underground Hardcore Berlin” and his new DJane took over the promotion part for this new label.

After several lessons in the studio and in the club, the project “Beagle & Miss NightKat” was born.

Since then, the two thrill their fans with regular appearances in the M-Bia Berlin, Melody of Madness (Berlin) and in the Dark Flower Club (Leipzig).