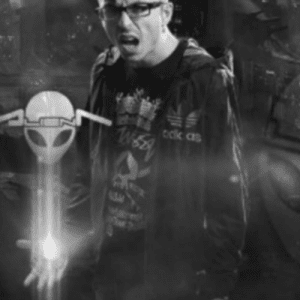 Marco Collini was born on the 9th of March 1983 in Campobasso and he always liked music, he started to love electronic music when he was child, and in 2000 he listened for the first time hardcore music in a compilation of that period (Extreme 2000) and he loved it at the first listening.

In 2002 Marco bought his first turntables and started to improve his skills in deejaying, but in his city unfortunately there wasn’t hardcore music, and he must go to Rome to buy Vinyls and CD’s, and at Virus Records and Deejay Mix (2 Romans Vinyl Shops) he met 2 important hardcore artists: Hellsystem and Amnesys.

Marco and Amnesys became big friends, and Marco understood a lot about hardcore music in his conversations with Dario, and decided to start to make his own productions.

From 2004 to 2005 Marco played in some medium and big parties in Switzerland, and he was one of the winners of the Megarave’s newtalent dj contest.
In the same time Marco thanks to his big passion and the advices of his big friend Amnesys became good in his productions and, at the end of 2006, he decided to send a demo to G-Net Records (Sublabel of Traxtorm Records) and The Stunned Guys decided to release his first records “I’ll be tha hardest E.P.” in 2007, then Alien T was born.

Thanks to his first record, Alien T in the same year played for the first time at Florida (the most important italian hardcore club) at parties like Sunbeat 2007 and The Nightmare in Italy.

In 2008 he played for the fist time in the main floor of a really big italian party, United Hardcore Forces, and in the same year he played also @ Masters of Hardcore in Italy and Sunbeat 2008.

At the end of 2008 Alien T undestood that if he want to develop his dj career, he must move himself to Brescia, where there are the most important italian parties, so he went to live in Adro

, and luckly in the same town there are the Studios of Claudio Lancinhouse, that decided to give to Alien T one of his two studios to make music.

Marco’s choice was right, and thanks to the helps of his label too, his gigs improved a lot and on 2009 he played at about all the most important italian hardcore events like: United Hardcore Forces 09, Masters Of Hardcore Italian Freakz, E-Mission, Fusion-E, Conflict 01, History Of Hardcore, Kick.It, Sunbeat 09, and in the same year he played also at Hardcore Italia Stage @ Dominator Festival

and one of his tracks “Wartime” was selected for the official compilation of this party!

Alien T kept on working on his music, improving a lot his skills also thanks to the professional studio. He produced 2 new tracks “Bullets in their heads” and “Ghetto mentality” and Maxx (The Stunned Guys) really liked that, so he decided to release the Marco’s dream: to became a Traxtorm Records artist!