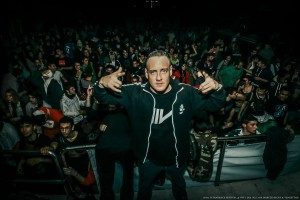 Vendettah olso known as Rini Peteren was born on 19 of December 1985 in The Hague. In 2004 his passion for hardcore started to grow. After a few years of visiting hardcore festivals he found his own inspiration. That's why he started to produce his own songs.

He bought his own equipment and started his own career as DJ with the old fashioned long playing records. In 2008 he played his music in a club on his birthday. After his 5 hour performance the managers of the club were very satisfied and they offered him

to come and play again in the club. This is where it al started to take off. Actually is producing his biggest passion, he puts all his emotions in his music and you can find that true emotion back when he is performing.

The first period of his performing he choose uptempo hardcore & terror music. After a while he became a huge fan of performing and the music he played became very popular. He started to perform throughout the Netherlands at al the local area's.

After a couple of years he realized that producing was his bigger passion and the music toke his heart. Some people find it hard to put a finger on it. But he is not really care about the 'typical' names.

It is Hardcore, Terror or Frenchcore? People always wanted to tell him what to do or what not to do. After a period of 5 years not able to produce any songs, something odd happened. Some friend heard his new style and said that he had to share this

with the rest of the world. That gave him the power and he started with 2 Free releases. His first free release track are called 'Ganja in my brain' and 'Don't Speak'(Rock 'n Roll). After these two songs his music and name started to get an identity.

In expectation of the responses of his fans he continued his new identity. Afterwards when he heard that several well-known artist were playing his music on the bigger festivals, he started to believe in himself. From that point 'Vendettah' was a fact.

In spite of people not knowing what type of music he was producing it is classified as Frenchcore music. People think it is an interesting mix of Hardcore, Frenchcore and Terror all in One.

He had performes all around the World in Country's like Belgiüm, Germany, Slovenia, Spain and The Netherlands of course! There are some great stuff about to happen for him in the Future so keep your eye's open and follow this artist around the world.