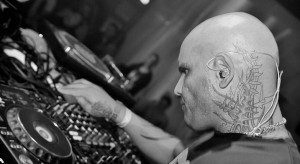 Unexist breaths and lives hardcore. ‘Unleash the Brutality’ he calls it in his own words. “Hardcore makes me loose my anger, pain and aggression. It’s an addiction that’ll never go away.”
Francesco is always busy developing his characteristic Unexist-sound. Under his alias DJ Jappo, he scored (together with DJ Lancinhouse) a big hit with EXLXAXL which was released on The Real Motherfuckers E.P.. He made Industrial Strength Records a succesfull company. He produced and played together with dj phenomenons like Lenny Dee, The Horrorist, Promo and Manu Le Malin.
When he moved to New York for a year, Unexist emerged himself in the scratch-scene. By now, the Italian turntablist is the on of the best scratch-masters we know in hardcore.
Unexist started his dj carreer in the famous Club #1. He performed in Evolution (Swiss), CBGB’s (New York), played at Multigroove, Hardcore Ressurection and Thunderdome.
He also performed together with DJ Starscream, aka DJ # (0) from Slipknot.