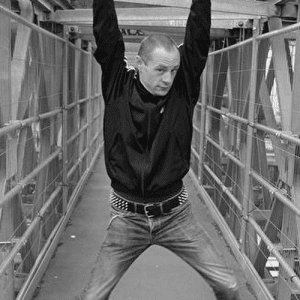 If youve been ANYWHERE near the dirty end of techno in the past 20 years, you may know the name.
If you’ve been anywhere near a UK or European festival in the last 10 years, its more than likely you know the name.
BUT – If you’ve had any dealing with the underground hardcore techno scene since its conception, then you DEFINITLY know the name.

Keeping it simple, The Dj Producer 1st “came into relevance” September 11th 1992.
At the age of 18, Luke was already Resident for the south west of England “Universe” organization, playing the sped up, rave infused, breakbeat bangers
of the time. But on this night they were to import a European hard techno dj, something rarely seen at the time in UK events. Luke saw this as an opportunity
to play a more techno orientated set that night, something he had never done before, and as resident felt obliged just to “make the German guy feel comfortable”.
A move, that if the public disliked, Luke may never have gone down that path again………as it turns out, it was that set that put The Dj Producer on the map, and
from that day forward proclaimed himself “a hardcore techno dj (which at the time you could count the amount in UK on one hand). That proclamation in 2013 remains.
And so do the breakbeats 😉

PUT YOUR HANDS IN THE FUCKING AIR.

Luke has been in the game long enough &amp; strong enough to have played pretty much EVERY relevant underground organisation there is to play for.
over 20 years in over 20 countries. damn straight. But Luke’s motivation is beyond purely clocking miles, or scratching notches on bedposts.
His passion for music stems way, way back, and his hunt for the elusive &amp; exclusive cuts made him what he is, couple this with a devastating mixing technique
that rivals most computers &amp; his overkeen spidey sense to adapt to the dancefloors demands, and you have one of the most enthralling jocks ever to emerge from the UK’s
murky underground depths……..The music may be filthy, but Luke understands its every nuance intimately, and his performances demonstrate this….control freakery within chaos
— and no sync button in sight 🙂

WHEN THE DJ – BECAME “PRODUCER”

Always unintended, as Luke always said “dj’s who make music is just a cliche”…..and for a long time it was…..but in 1994 luke met with the owner of the legendary
EDGE records label, Gordon Matthewman, whilst djing, a just proposed maybe he come to the studio in london &amp; try at a couple of tracks. Luke jumped at the chance…..
they soon after reconveigned, knocked out 2 tracks in 4 days, with lukes ideas on notepads &amp; gordon at the helm….the end result.. Edge Records *13….. 13 unlucky only
for some it would seem.
After this encounter, and the buzz of receiving the final finished 12″”, luke was well &amp; truly hooked…&amp; the DJ-PRODUCER was born…….again.

Even from his very first production attempts, it was a combination of kickdrums &amp; breakbeats. after buying basic home studio equipment in 95 he arranged &amp; produced 4 tracks for the
scottish “Storm Breaks” label, and self produced “The nightmare on b-kore street” (an early anacronym for breakcore – hence refering to the breakbeat &amp; kickdrum combination),
so from day one, once he had learnt his equipment, he already understood how he wanted to forge his musical identity.
As the Dj, he was receiving all flavours of hardcore techno on wax from all corners of the planet, and was particularly drawn to the high velocity kicks of early industrial french hardcore,
and the dirty halfspeed breakbeats of australian industrial hardcore, so started messing with elements from both styles in the studio.
Around this same time period, whilst djing at a large Helter skelter event he was apprached by a guy, who armed with a white label “dared” him to play it there &amp; then.
That someone would turn out to be Julian cobb – owner of Deatchant records……and about 1 year later those tracks would become Luke’s 1st Deathchant release.

Since those early, heady days, Luke has racked up an impressive back catalog on a myriad of labels, featuring his historically revered deathchant releases, collab albums
with Hellfish on the mighty Planet Mu, His doomsday Mechaniks album on Bloc 46, releases on The Third Movement, Killing sheep, Industrial strength, Neurotoxic, Psychic Genocide,
and all aside from A&amp;Ring &amp; managing the Rebelscum Label since 1999, which has nurtured both his experimetal side as an artist &amp; in recent years become the springboard for a whole
host of new artists who are only just now becoming big deals in there own right. . . .