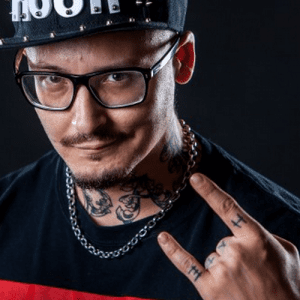 Sebastian (Christian Sebastian Sereno) is the producer behind The Braindrillerz project, born in 1982 he started djing progressive & techno music at early 1997 in many parties and clubs in North Italy.

In 2000 he went to his first teknival in France and discovered his new passion for the hard electronic music.

Sebastian was searching the way to express himself and to spread his music to the crowd so he decided to start organizing party in is own town in Italy, teamed up with Violent Underground Crew creating the series of event ”Born to be Hard”.

After some years his notoriety was growing bigger and bigger, he decided to teamed up with Francesco well known as (Inktomi) trying to fuse all the shade of the Hardcore in one creating that typical ‘DRILL ‘N KORE’ sound able to be recognized in every dancefloor where they were playing.

First releases were coming in 2011 on digital labels like Noise Bomb Record, Avanti Records and N.e. Tunes Records, but had to wait till the year later with the release on Noistorm Records’ Frenchcore S’il Vous Plaît, anthem of the notorious dutch party organized by Noisekick, to be noticed by the audience and called to perform in always more parties.

The 2012 was definitely the year of the explosion of The Braindrillerz, the unique energy on the dancefloor united with the passion and the crazy live act on stage were the key of the success,
becoming headliner in all the major clubs and Festivals in Europe

Meanwhile a new concept was born, presenting to the crowd DRILLKORE ARENA, a one night concert with the best artists of the hard music.

Production and collaboration were evolving releasing in 2013/14 two vinyls EP, with DJ Sirio on Neurotoxic (Audiogenic) and with Adrenokrome released on Homicidal Gang (Astrofonik),
in 2015 ‘The Train’ EP on Psychik Genocide, ‘Voice of my Soul’ on Brutale (Traxtorm) till the most recents works ‘Dope as f*ck’ EP collaboration with Dr. Peacock including the infamous remix ‘Nuclear Sun’ made in ’93 by one of the Italian techno pioneer Roland Brant.

In 2016, after Francesco quit his music career, Sebastian is focalising on evolving the Drillkore sound to the highest level.

The Braindrillerz has performed in hardcore stages like Masters of Hardcore, Zurich Street Rave Parade, Defqon1, QBase, Dominator Festival are just few examples of the parties that he has crashed.

Spread the virus! DRILLZ ON!