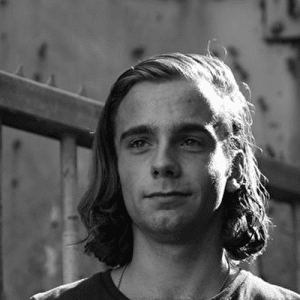 When he started to listen to electronic music, It was love at first sight.
Only the knowledge of the different styles were not yet present.
It started with the Minimal, House, at age of 14 he bought a pair of cd players and started practicing.

Soon he started to play for crowds at local party’s. Not the best crowd to play for, but it gave him some expierence for what was yet to come.
In the coming 4 years it was all about expirimenting with different styles.
Which came out as playing old disco records and alot of deep house.
Then a visit to Tresor Berlin made him forget all that in the end of 2009.
This was when the Techno became a part of his life.

Back in Amsterdam he started to visit Techno party’s regularly, And the techno worked like some kind of an addiction.

This worked out in a period with allot of practice, collecting and learning more about Techno

Then there was this particular party in The Bunker in Amsterdam, Where he got blown away by the raw sound that this artists together with the room, can produce.

Not only that, but it where also the people, and the love that where there.
This was a mayor source of inspiration together with the other underground party’s that where going on by that time. Things went very fast from that moment on. Not more than 5 months later he turned 18 and actually got the change to play in The Bunker one month later. Then in 2011 he started to get gigs regularly, these were variating from after – parties to club nights.

Where he, Just to name a few, played alongside A. paul, Ritzi Lee, Egbert, Jeff Rushin etc.

Now with almost weekly performances you will maybe bump in to him, but what can you expect?

It depents on the night, time and the people, But the base layer will always be Dark Minimal – Techno.

The main goal is to take the crowd on a adventure for as long as possible and don’t give them what they always expect.