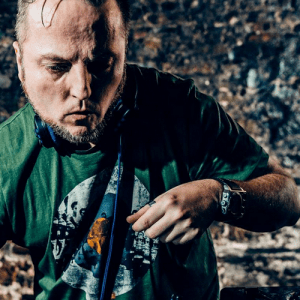 During this event he meets David Duriez (private la Grange resident).
From October to November 1995 they start to work together on an hardcore project which has been released on a label in Antwerp called ZOMBIE Records in January 1996.

In May 1996 Sandy works with Liza n Elliaz and they start to work on some projects for Sony Music’s Lethal Hardcore Forever, an hardcore compilation, where 4 of the tracks are produced by themselves.

2001, Sandy Warez decides to dedicate himself 100 % to producing new tracks.
In the end of 2001 he starts with a track on a Belgian label called D-Form Records.
Sandy Warez – Plass Shot E.P. is released.

2003 comes and Sandy Warez starts off to be more and more active in worldwide music production.
He releases Sandy Warez – Spanish Cookies on Invasion, the label of the welknown producer Zzino.
After that again 2 very successful Subsounds which will have a very nice commercial success :
TRIBALS TRICKS VOL 2 et HARD ACE VOL 2.