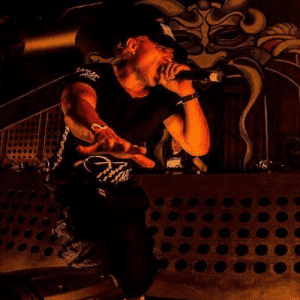 When you ask Google to tell you what ‘Ruffian‘ stands for, the first search result directs you to a Dutch MC. But Carlos Antunes, who goes by the artist name of Ruffian (and is also known by his stage names The Preacher and Don Carlos), actually refuses to be called an MC. This doesn’t mean the following search results fit Carlos better. Although… a champion racehorse is fast and powerful, just like Carlos. And a chess program is intelligent and will have you checkmate before you realize it. Makes a match too, so be aware… Still, ‘our’ Ruffian is the first guy indeed. He is just simply much more than ‘only’ an MC: he’s a thoroughbred entertainer! Better call this vocalist, producer and performance artist a host, mic wreckah or crowd controller.

Ruffian is a major league host who was at the inception of the Dutch hardcore-, hardstyle-, jump -, electro-, and hiphop scene. He helped building up these scenes to what they are today and left a yellow brick road behind for other MC’s and vocal artists to follow his footsteps.

During the years, Ruffian has worked with some of the biggest names in the dance scene like Paul Elstak, Technoboy, Neophyte, Evil Activities, Nosferatu, Distortion, Firestone, Outblast, Predator, Darrien Kelly, Stunned Guys, Promo, DJ JDA and Gary-D and his list goes on and on. He is the vocalist who brought you titles like ‘Thrillseeka’, ‘Rage’, ‘Hardcore Taking Over, ‘The Undersound’ and ‘The Champions’.

Ruffian: not the champion racing horse you might have heard before, but the champion host of the Dutch dance scene. If you need a voice with personality (re-)presenting you and/or your concept, book Ruffian. Just know in advance: prolonged exposure to Ruffness can result into serious mental disorders. But hey, would you really want to have it any other way?