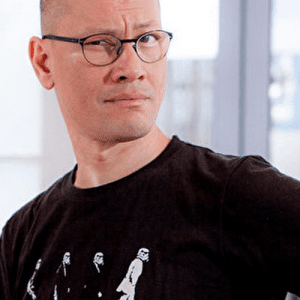 biginning of the rave parties in France.

Ho discovered a new expression mode : DJ without microphone. music only, for

hours and hours. He starts mixing in the gay radio FG, the first radio involved into

After the Maday Rave in Dortmund in april 1994, he jumped into the hard style,

Under the name “Ingler”, he signed many records under Industrial strength, Six sixty

He started to play all over the planet, from Germany to Japan, Switzerland where he

was playing twice a month…

1998 marks the second period of his musical activities. 2 new label UW and anlx,

more experimental and techno, and less hard than epiteth rec, but still underground.

Then he created UWe, with 2 fucking guys.

This is biginning of hard times. Too much work in the label (creation of Human, the

CD mix label), and too often behind his Mac working in graphic design and stuff at

UWe, he started to work less as music maker.

different side projects with styles very far away from the dance floor.

2 electronica albums under the name Carla Elves. the cover was designed by Matali

Crasset, a great french designer, and a musical egg timer released at Pa design, a

Many work as mastering, post production work, and graphic design.

creation of a new label Modulo, with the release of Unit, one of best NY electronica

Resident at the Rex club for 5 years, He plays now a groovy electro techno, and

more info on the web site www.laurentho.com, with 2 mix on mp3, graphic works and