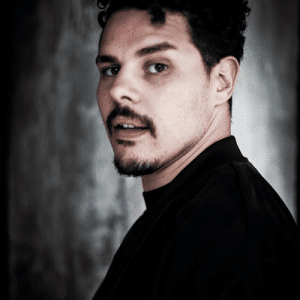 Ici Sans Merci a dj/producer of underground electronic music began his career in 2006 out of love for music and wanting to share this passion with the world. “1LOVE and that’s underground”.

Earning his stripes through the underground scene and illegal raves located in Amsterdam and throughout the rest of the Netherlands, has allowed him to become the DJ he is today! His style is extremely divers. He loves to create a merge of groovy deep, minimal like and extra-terrestrial sounds in his sets with an acid and techno edge to it. “I call it: future music”.

His characteristic own style attracts fans of all styles of electronic dance music and made him perform at a variety of parties.

Already known and highly requested in both Amsterdam’s biggest clubs and festivals held across the country, ICI SANS MERCI has managed to spread his music to the international scene as well. Places that have been infected by his sound are; Ibiza, Berlin, Amsterdam, Copenhagen, Antwerp, Barcelona, Mallorca and Marrakech.

On the constant rise, ICI SANS MERCI’s popularity continues to flourish. His breakthrough as a recognized artist can be reflected on his recent achievements. A featured artist in the line-up for large events in 2012,2013 and 2014, such as Awakenings Festival, Welcome To The Future Festival, Amsterdam Open Air, Amsterdam Dance Event and many more. He was also presented with the Dutch Techno Award for “Best New Artist of 2012”. Other Award winners: Joris Voorn and Speedy J.

Ici has his own Concept named: Youth In Revolt. The first three editions were held in The Chicago Social Club with great success, the concept is now tending more towards a raw underground environment. From the Underground to the Club scene has made him resident DJ for organizations such as: Format, Karousel, Chateau Techno and Lazy Sundays. He has played alongside distinguished DJs like: Alan Fitzpatrick, Cari Lekebusch, Carlo Lio, Dubfire, Len Faki, Steve Rachmad and Paco Osuna.

Passionated and driven to advance his musical career in the future years, one can only assume that ICI SANS MERCI is a name which will be heard! He continues to amaze the electronic music world with his talents.