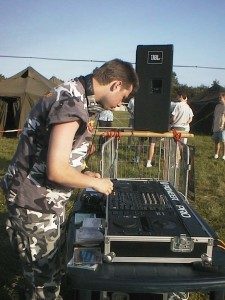 Tim Ummels (DJ Timothy) released his first vinyl back in the wonderful year of 1999. It appeared on AGV Records. His first track (Edge Of Darkness) was immediately a big hit in the hardcore scene. After that he started his own label DutchBad Records. Those were exciting times to say the least, also because he made his debut in countries like Spain, Germany and Belgium. But then it was time to get back in the studio to make some Hardstyle sounds. All the new tracks were released on his label 'Endless Trip', which rised in the world wide charts.

Frank Sloep (Franky SL) started spinning the wheels of steel in 1995. In this first generation “gabber time” he started with mixing Hardcore. After mixing Uptempo Club and Hardhouse for a while he learned about a new style, a style he couldn’t resist mixing: HARDSTYLE! Besides playing music, he also dived into producing in 2003. At the end of this year he launched his first record after which many followed very quickly. In the year 2004 Franky SL started his own Label; SL Music Productions. SL Music is now history, because all new tracks will be released on Special Records (a sublabel of 1st Division).

DJ Timothy and Franky SL (A-Drive) shared their skills in the beginning of 2005. With the combination of this two dj’s a new sound of productions and performances is born. With their music production company 1st Division they have released several vinyls on Special Records. Besides releasing tracks on their own label they appeared on Vip Records and Acova Recordings. A lot of new tracks are coming up for the future.

After performing at big parties like Defqon 1 (2005 & 2007), Inqoming, Qluptempo, Tectonik (France) and Club Mad (Switzerland), they decide to join bookingsoffice Cyndium. Becoming a member of Cyndium will give their careers a new impulse with much more coming up, and new gigs in and abroad Holland already confirmed.

Finally it is time to conqueror the Netherlands and the rest of the hardstyle minded world. So watch out for this dynamic duo.