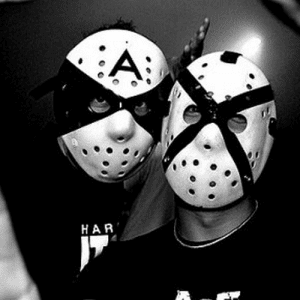 Since then they were unstoppable: spreading out to the USA, Canada, Australia and eastern Europe they continue to publish track after track, becaming one of the leading act of the present hardcore scene. In 2011 they were in charge of the production of two of the biggest party anthems: Dominator and Thunderdome. Doing so they evolved their sound into a more mature approach to music, which combines harmony and technicality with the rawness and power that needs to be found in hardcore music.

They’re also involved in other side projects, like helping new talents to grow and last but not least “Meccano Twins”, a project made by Josè Sendra and Cristian: a darker and more heavy vision of hardcore.

Since the year 2000 Armageddon Project have performed throughout The Netherlands and Europe at numerous events, such as: Thunderdome, Defqon 1, Astropolis and many more.