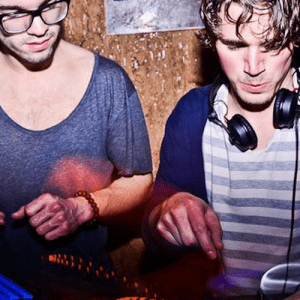 This duo, consisting of Wietse Bos and Lex van Aken, met each other in Studio 80 in Amsterdam. From that moment they started meeting more often as their taste in music was so alike. That same summer they went to Off Sonar in Barcelona, which was an important experience in their process of becoming Djs. They are influenced by names such as, Henrik Schwarz, Art Department, Soul Clap, Tiger & Woods, and Solomun, but also by more oldskool stuff from the 90’s like Daft Punk and Bobby Brown.

Lex started playing in 2008 in Gainesville, Florida ??, where he was studying for a year at the University of Florida. Every Thursday he played in a little club called Spank. This experience was so overwhelming that he knew this was something he wanted to do more often. His roommates in America got tired of him playing music all the time. He was influenced by 90’s Hip Hop, Techno and Disco tracks and you can still hear that in the sets.

Wietse was always the one at a party choosing the music to play and his love for deep house with and edgy disco sound was well appreciated. He only started playing when meeting Lex and that’s where it all begun.

Since that moment they have been making Mixtapes and those were well received. Their first big gig was playing at ‘The Chicago Social Club, where they had the honor to open for Catz ‘N Dogz. After this they got booked in Groningen, Maastricht and Amsterdam,Lima (Peru) where they played with names such as, NOIR, Matt Fear, Martin Augustin, Gabriel Ananda, Miss Melera, SHMLSS, Darko Esser, Matt Tolfrey & Sam Russo.